It is no secret that we love swimming on the Lilypad, so when social media powerhouse Kenney Myers asked to guest post on his experiences, we were delighted to share them. I therefore hand you over to Ken.....

Every child is unique and has a different disposition in regards to the way they take on life. It is so important that we as parents take each one of our children’s dispositions into account before we begin anything new and this includes teaching them to swim. I have two children and both were totally different when it came to their reactions to water and learning to swim.

I have heard that fear is passed down through generations. I am inclined to believe it though not through genetics but instead perhaps through example and empathetic association. My own mother was terrified of water and did not swim so when it became my turn to swim I too was frightened. Probably because every time we would get near water she would firmly grasp my arm and pull me away.

Introducing me to swimming took a gentle hand and a gradual time frame. I had an uncle who did not believe in coddling children into swimming and he actually threw me into a lake. It did not go as he had planned however and he ended diving in to find me. I panicked and the sheer terror on my face was enough to keep him apologizing to me and my mother for years to come even though I came out physically unscathed.

I did learn to swim eventually. I actually was not really afraid of the water in itself; my fear was more about being able to feel firm ground beneath my feet. I wanted to be very sure I could get my head up out of the water at any given moment. I was fine in the shallow water of a pool but the deep end terrified me. Lakes and oceans of any kind terrified me shallow or not, this fear came from what lurked in the deep and the possibility that I could at any given moment be bitten or swallowed whole. This was unrealistic perhaps but nonetheless real in my young mind. I think this fear came about when my grandfather told us stories when we were at his home by the lake. He told us there were catfish in that lake that could swallow a man whole. Thanks granddad! 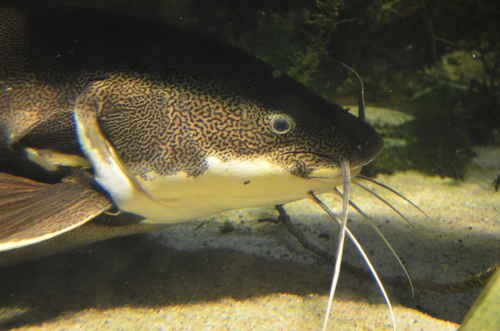 My parents put me into a beginners swim class in which I stayed for a couple of years. When I actually advanced to the next level of intermediate they expected us to jump into to the deep end and swimming to the shallow. Believe it or not I actually achieved this goal because I could swim very quickly because I wanted out of that deep water! But when I left intermediate classes into advanced classes my swimming came to an abrupt halt. They wanted me to dive head first off of a diving board and that is where I drew the line. My parents did not push it at this point; they were just delighted I knew how to swim. That was their goal. Me not drowning!

When my children came along I truly did my best not to impose my fears upon them. However, my daughter was born not wanting water anywhere near her face! Just washing her hair was daunting. So I began right away letting her play in shallow water and try to gently show her that water was not to be feared. Giving children a secure environment to explore in can really help them to overcome unrealistic fears.

I also put my daughter into swimming classes at an early age. I did a lot of research to ensure that the swimming school I chose was able to meet the needs of a timid child. I did not want her to be permanently scarred from a careless instructor. And she pretty much followed in my footsteps when it came to swimming. She was afraid of the deep water, she liked to keep her feet on solid ground, and she certainly did not take well to be thrown in the water. A friend of the family decided he would give her a little shove when we were at a pool party. The results were exactly the same as when I was thrown in and it slowed down her progress immensely. This is why I very much believe in thoroughly knowing a child’s disposition and proceeding accordingly.

For some children the sink or swim method works well as in the case of my son. My son was not afraid of water and from the beginning did not care if he got water in his face. He loved everything about water and could stay in it all day if you let him. When we started taking him to the pool no one actually had to throw him in, he threw himself in! He actually thought that jumping in and sinking was swimming and he was really proud of himself! This was terrifying to me to say the least. We had to watch him very closely every time we were around water because he would just jump in and sink. Upon pulling him out of the water he would get very excited and ask us if we saw him swimming! In a way it benefited his sister who was several years older than him to come out of her timidity when it came to water. Her love and protective nature overcame her fears when she saw him sinking to the bottom and she would immediately go in after him. One of us was on hand at all times to ensure his safety. 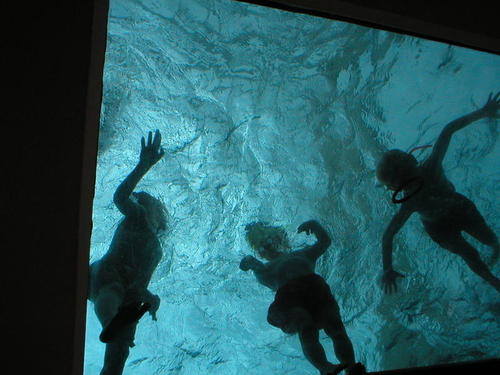 We did make a point of getting him into swimming lessons right away because his form of swimming was not acceptable. He went through the stages of the swimming school very quickly and mastered it. He was absolutely fearless when it came to swimming. The swimming park we often went to had three diving boards, one which was very high. Thankfully they had an age and height limit on this diving board or he would have been up there at age three. When he finally was able to go off of that board my heart still sank every time he climbed that ladder but he absolutely loved it.

I feel that it is very important to watch and understand your child’s particular disposition and the way they handle new challenges and life in general. The sink or swim method may work wonderfully for one child but greatly hinder another. Swimming is such an important skill for every child. Whether or not they feel comfortable diving off of a diving board is not as important as is their ability to not drown. In the day and age we live in we do not have to go out in search of water holes, there is water everywhere in the form of fountains, reservoirs, bayous, and backyard pools. We as parents need to ensure that our children have the ability to keep afloat in any circumstance.

Swimming needs to not to be taken lightly but it also needs to be made enjoyable. For both types of children, the daredevil or the timid child, being near water is something they need to feel confident about. Children also need to be taught to have a reverent fear of water, to know its propensity for fun and for danger as well.

Ken Myers is a father, husband, and entrepreneur. Learn more about him by visiting @KenneyMyers on Twitter.